…you’ll no longer be amazed!

What might seem incredible today will be quite natural to most of us five years from now.
Douglas Adams – author of the Hitchhiker’s Guide to the Galaxy – explained to us that  END_OF_DOCUMENT_TOKEN_TO_BE_REPLACED

Samsung Galaxy has shown a new type of display that can fold into two or four parts and can take the bang of a hammer without breaking. The thin bendable display is (supposed to be) made of a graphene AMOLED material that make it flexible and thin as a sheet of paper.
Read more here

Creative Summit is held in the North of Sweden where the nature is right on your doorstep and the midnight sun shines almost through the night. During two days in June, great minds from all over the world will gather to share, talk and think about how the communication industry will evolve in the future.

This will be the fifth Creative Summit and my plans are that it will be my first.

Will I be seeing you there?

Over half the world’s population now lives in an urban area, and 75% will call a city home by 2050. But not all cities are experiencing growth, some are actually shrinking.
Urbanized is a fascinating documentary about cities, looking at strategies behind urban design of some of the world’s foremost architects, planners, policymakers, builders, and thinkers. The film opened my eyes to several urban design projects around the world.
Housing, public transport, public space, people’s engagement, economic development, and environmental policy are universal concerns. Yet many of us feel that decisions on these issues are made by an isolated elite.
I feel that we all should be able to take part in these plans so important for our future life.

Clay Shirky explains the real problem with the SOPA/PIPA bill that the US Congress is about to make into a legislation that threatens to close down the Internet. At the TED offices, Shirky delivers a proper manifesto – a call to defend our freedom to create, discuss, link and share, rather than passively consume.

It may seem that this is a US only problem, but it actually is directed against the Internet globally.
Please watch the whole video and act!

If you’re on an iOS gadget you may click this link to watch the video.

An amazing look into the future when we can print any object at home. It will even be possible to print human organs for transplantation. I would say that this is a realistic view of the “Beam me up, Scotty” concept.
The first hobby machine being made available is called Printrbot:

No, curiosity is something good. Today there’s even talk about not killing young children’s curiosity during their first school years. Amazing if that will happen within reasonable time…

Personally, I am devoted to make a living from my curiosity. People used to say that “I don’t want to die curious”, meaning that they were devoted to satisfy their curiosity. I would rather state that I’m going to die still being curious. My almost unlimited interest lies in many things, especially the extremely fast technology development. Digital communication and social media are some of my favourite areas. All this is very useful in my new role as a free agent doing situational and scenario analysis. I even found a new title – Future Strategist – after taking an extended course at Kairos Future.
So now I’m looking for challenging opportunities to do some work in my new role. Anyone up for a new strategy? I am here to assist you!

I just remembered a really inspiring talk at Guldäggsdagarna 2010. This was almost a year ago, but I believe it is still well worth sharing. 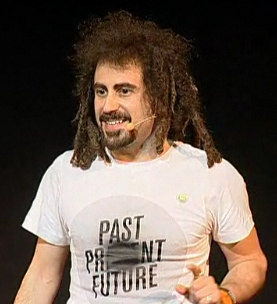 Faris Yakob was Chief Technology Strategist of McCann Erikson in New York, and is today Chief Innovation Officer at MDC Partners. In his presentation, Faris used a mind-provoking definition by Bran Ferren that technology is stuff that doesn’t work yet!

Links to stuff not shown in the video

Moore’s law: page 26 in Deloitte – The 2009 Shift Index
Kryder’s law on computer storage costs: page 27
Gilder’s Law on cost per communication bit. Eventually the cost of a telephone call, or of a bit transmitted, will be “free.”
Media fragmentation by Millward Brown
PS – Can’t view flash on your device? View this post on a regular computer (Mac or PC).